This is Sheriff Peanut Butter Brickle.  Do I look like I can sell ice cream to to a polar bear?  Do I look like I can sell a pie to a bakery that bakes pies?  You catch my drift and it smells good.  If my occupation was a salesman, I would rock and roll and rise straight to the top.  I would be on top of my game like maple syrup on a pancake. Like peanut butter on jelly.  Like brindle stripes on a catahoula.  That’s me.

But like any good salesperson, I know my clients.  I know who I am selling to. I have to know my territory.  And I have to respect when other salespersons have claimed an area.

Such was the case this past weekend.  You see, I knew my game plan for the day.  Since Memaw Macaw is moving, and she is packing and trying to get rid of stuff, she needs to sell some stuff.  And this is the last week that we are here with her. So I was surveying available places to sell her stuff to.  A good salesperson always does research.  But I knew right away that this neck of the woods was not a good territory for me.

I also knew what items I had to sell that day.  That makes the difference to a salesperson to.  For instance, if someone knocked on my door trying to sell me handsome, that would be futile.  So.  What did I have to sell? On the agenda was a ladder.  A really tall ladder.  And a lawn mower.  And I thought about it.  Would a ladder be needed here?  Well, only to get out of the way of the alligators who actually were already in charge of selling here because they are in charge of everything here.  And in such a situation, they would more than likely eat the ladder.  So yeah.  Not a good selling point.  Not a good territory.

And then the lawn mower.  Obviously, no one cared to mow the lawn here at this swamp and river.  I am all about innovation and introducing a product to the public when need be.  But the alligators in fact had this covered too.  They were their own mowers of sorts.  And so I left that territory with a new found goal.  I could do this. I could sell this ladder, which in fact Memaw Macaw had bought from another yard sale, which in fact makes no sense.  And I could sell this lawn mower.  Because.  Yeah. This is Florida and the grass grows as fast as Deputy Digby’s appetite.

I thought about it on the way back to Memaw Macaw’s house. And I guess Boy Person had already read my mind.  Since the ladder and the mower were already here, why tote them around door to door? This was not 1988 and I wasn’t selling encyclopedias.  The only thing you ever need to look up is why I am so handsome, but they don’t make encyclopedias anymore so the answer will never be known.

Boy Person had read my mind.  He had put the ladder and the lawn mower by the road with a sign that didn’t say “no swimming” like those alligators had put up in their territory. No, but this sign was much more effective.  $20.

This was good thinking on Boy Person’s part.  Although it was just the beginning to this week of packing and getting rid of stuff, well, it was a good start. And the persons had high hopes that they would sell quickly. But as good as a salesperson as I wanted to be, the Sheriff part of me…the biggest part of me, well, it had other ideas.

Because, you see, as much as I wanted to be the top salesperson in my category, I realized that I was the only salesperson in my category, and therefore, I would be at the top no matter what.  So when I realized this, I realized that even if I didn’t sell the ladder, and even if I didn’t sell the lawn mower, I would still be a success.  So I decided to do what I do best.  Sheriff it up.  And so every car that pulled up, I barked and growled and arrested them.  This went on all day.  This went on all evening.  And as Memaw Macaw came out to see if anyone had bought her goods, and realized that they had not, I could see the glimmer of approval in her eyes.  She didn’t want to get rid of anything after all.  And I had done her good, y’all.  Everyone. Is. Welcome. 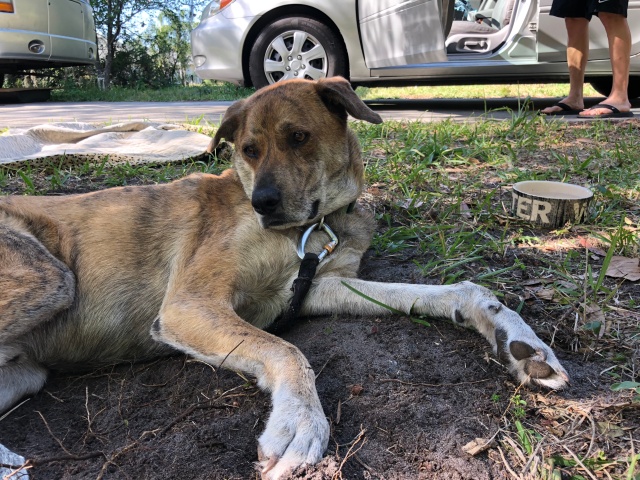 Sometimes, we may be our biggest critic.  We may think that we aren’t good enough.  That we aren’t at the top of our game.  But if we do our best, being at the top is guaranteed.  You don’t have to climb any ladders to be a success.  I may not win any awards for my selling numbers.  I may not be an employee of the month. But the alligators can do it their way.  And I will do it mine.  You do it your way too.  Make yourself proud.  That is who counts.

Also, by the way, I have a ladder and lawn mower for sale.  Bahahahahaha! Come and get it.