Millions of animals are abandoned every year. Many of the shelters and rescues that care for these animals are struggling on a a daily basis. Who will help them?

Saving the lives of animals isn’t just about adoption. Saving the lives of animals isn’t just about spaying and neutering. Yes, of course, these are crucial aspects in solving the problem of pet homelessness. But at AniMeals No-Kill Adoption Center and Animal Food Bank, they have taken a different approach to how they help, and they take their mission very seriously.  AniMeals supplements the food needs of the homeless animals found in shelters and rescues. This frees up valuable dollars in the shelters and rescues for other critical needs, like medicine and surgeries. 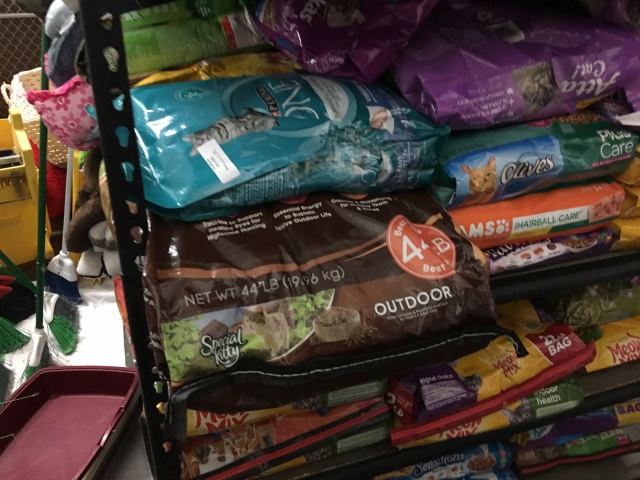 On the latest episode of Stop Hounding Me, you will meet founder, Karyn Moltzen and some of her valued team members who work hard every day with a sense of humor we found inspiring!

In Missoula, Montana, we chose AniMeals for our #45 rescue pick on this Adventure Of A Lifetime.

What is their mission that they hold so dear?

“To help the hungry, the helpless, the lost, and the little ones just struggling to survive; to house and feed as many animals as possible; to ease the suffering of the weak and unloved; to build a No-Kill community and realize the achievement of a No-Kill nation”. Just in 2016, AniMeals distributed over 84,000 pounds of dog and cat food to shelters, rescues, families in crisis and home-bound seniors. Yes. Amazing.  Can you imagine losing everything you had in one night and not being able to feed your animals?  Or what if you could not leave your home or were a struggling senior?  AniMeals provides hope and nourishment, not only to the body, but to the soul.

To visit a facility like this was indeed a privilege for us, and also was a different side of animal rescue that we were not aware of. We started off our visit by speaking with Karyn Moltzen, founder of AniMeals.

As with every rescue or shelter that we visit on this this trip, we like to ask the most obvious question. What made you do this?

Karyn explained that she was a successful business woman, running a very profitable company. After reading a story on a local rescue, she decided to write a check. “Because that’s what people did when they wanted to help”.

She not only wrote a check, but brought in some food donations to this rescue and was told that the animals’ dietary needs would not allow for a change in food. Now, she had all this food, but nowhere to take it. After calling some rescues, she realized that the need for food in feeding the animals under their care was overwhelming.  She also realized that many animals in Montana were being euthanized due to not only lack of space, but lack of funds for food. She decided someone had to do something, and that someone was her.

Due to the determination of one person like Karyn, what can be started? In the last 10 years, AniMeals has sent over 650 tons of food and supplies! Their area covers 147,000 square miles and encompasses the entire state of Montana. These numbers are certainly impressive, and the hours that their volunteers have spent is as well. But is food the only part of AniMeals? Wouldn’t that certainly be enough? Not for Karyn.  A phone call changed her mission from solely being a food bank to a rescue as well.

Having fostered and adopted in the past, Karyn received a call from the local animal control. She was asked if she could take in eight cats that were at-risk of being euthanized for lack of space.  She could not say no, and ended up accepting 25 cats.  The no-kill adoption center at AniMeals was started along with programs including Honey Fund, Seniors For Seniors, and their Hospice Program along with many others. 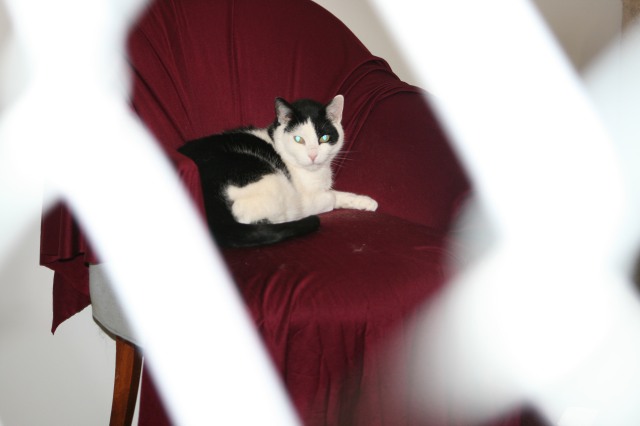 Karyn explained to us that they take the cats that are hard to place due to issues including medical.  AniMeals spays and neuters all of its rescues and gets them the care they need. 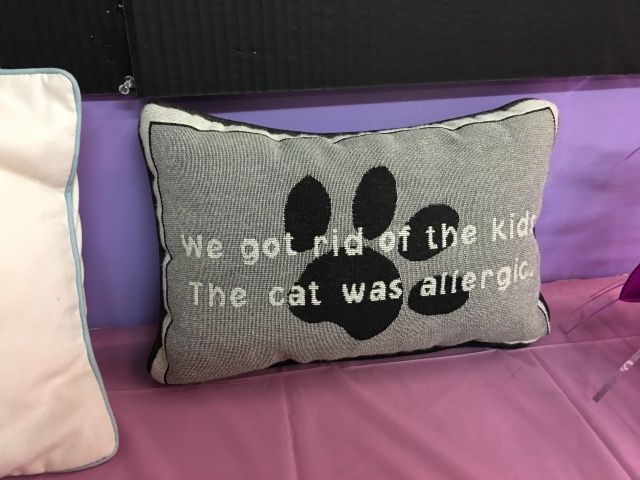 As Karyn said, “we do whatever it takes”.  And seeing the happy cats here who have found their transition point to a forever home, we KNOW that they go above and beyond for animals and people.

Thank you to Animeals for having us today in Missoula, Montana. Our #45 rescue visit. Sway here may have some disabilities, but he still would make a wonderful pet! He is named after Patrick Swayze for his swagger and love of life! #2travelingdogs #48states48rescues #adoptdontshop #animeals #missoula #montana

In 2010, AniMeals was called to help out with a crisis situation covered heavily by the news media.

One of the largest animal rescues in history, over 800 animals at a “sanctuary” were starving, ill and dying. Karyn received a call, asked her husband what he thought, and they got in their truck and went! Karyn told us of the struggle in not only feeding these animals dying, but in placing them properly around the country.  To write about this rescue operation takes words beyond the capacity of this article.  It also takes words beyond capacity to write of Karyn’s determination to do whatever it takes.  It wasn’t just finding homes or places for these 800 animals to go to.  It meant getting them healthy enough to go with medical care and proper nutrition.  And AniMeals did it.  Could all of the animals be saved? Unfortunately not.  But Karyn chose to focus on the many they could.  Asking Karyn what she was most proud of received an answer I was not expecting.  Karyn said she hated the word “proud” and I was touched by her genuinely humble spirit. Karyn is someone that I will always feel “proud” to have met.  For the days that seem impossible to an animal rescue advocate, Karen will be my inspiration to accomplish big things, but to never be proud, because there is too much left to do.  And for Karyn, too many mouths left to feed.

Animal rescuers often experience “burnout”.  When you deal with the overwhelming problem of unwanted and homeless animals, how do keep going?  After speaking with Karyn, and seeing the love in her words and goals, we know how she does it.  She puts these animals in the highest regard, whether they are healthy or critically ill. 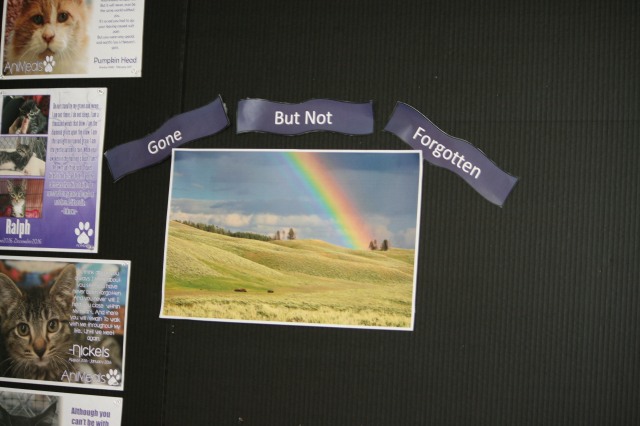 She puts her focus on these ones, knowing them personally and knowing that even if she cannot save them all, who she does save means the world to that animal, like Amber.

We can write pages about AniMeals. But we think the animals show the true story.  Amber’s owner died in her sleep. She lost the only home she had ever known. She is a very young and healthy 17 year old kitty whose love knows no bounds, according to the AniMeals Facebook page.  She is adoptable under the Gaia’s Landing program where her adoption fee will be waived and all food and litter will be supplied for her life time.  Can we support AniMeals and their efforts not only to feed the animals, but to help the people who care for these animals? 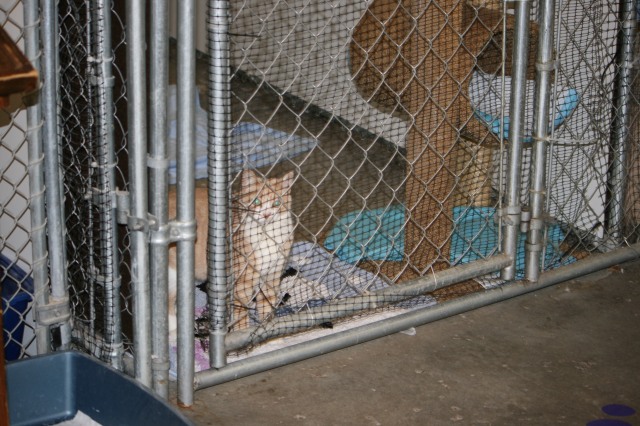 If there was ever an example of how one person can start a change, Karyn and AniMeals is IT.  The volunteers here work tirelessly and selflessly around the clock, but there are in desperate need of more volunteers with many different jobs available.

If you have ever been in a dire financial situation, you know how hard that can be.  Oftentimes, people will feed their animals before themselves and it is no different with rescues or shelters in need.  AniMeals fills that gap with healthy food and a giving spirit.  It is our privilege to have met the people behind AniMeals.  And with your support, they will be able to fund this operation for years to come.

For the month of June 2017, a generous donor has agreed to MATCH all donations up to $25,000.  This may seem like a large amount of money, but the amount to operate AniMeals, even for a short time far exceeds this.  Even $1 helps AniMeals!  Click here for more information.

We hope that AniMeals in Missoula, Montana has inspired YOU to do what you can, even as one person in your area.  Big changes can happen. And it can start with you.

See The Adoptable Animals At AniMeals

AniMeals is a 501c3 organization.  All donations are tax deductible.